`Ano`ai kakou…  An excellent video was recently released that explains the state’s failure to fulfill its trust obligations relating to Mauna Kea.  The six-minute video, “Fifty Years of Mismanaging Mauna Kea,” was uploaded to VIMEO (Link: https://vimeo.com/247038723) on December 12, 2017 by Kanaeokana, a network of ʻōlelo Hawai’i, Hawaiian culture, and ʻāina-based schools.  Here are some quick highlights:

1964 – Mauna Kea is identified by UH as an exceptional site for astronomical observation.

1968 – UH signs a 65-year general lease from BLNR for 13,321 acres of ceded lands at the summit.  BLNR can terminate the lease if the lease terms are not met, including care for the mauna.  A permit for “an observatory” was granted but numerous telescopes are built.  BLNR later issues “after the fact” permits.

1974 – Governor George Ariyoshi, concerned that the activities on the mountain pose a threat to its “priceless qualities,” directs DLNR to make a Master Plan for the mauna.  DLNR and UH draft 10 different plans, but the speed of development on Mauna Kea makes some of them obsolete before they are completed.

1975 – The Audubon Society resists the installation of the 15-meter sub-millimeter antenna.

1995 – UH cleans up trash accumulating on the summit only after the Sierra Club files a complaint.

1998 – The State Auditor releases a scathing report documenting 30 years of mismanagement of Mauna Kea by both the BLNR and UH and reveals that, despite spending $50 million per year on telescope operations, no observatory paid more than $1 a year rent.

1999 – Despite the audit, they build two more telescopes.

2007 – Third Circuit Court revokes NASA’s permit for an observatory project because of the state’s lack of a comprehensive management plan for the mauna.

2010 – UH’s new Comprehensive Management Plan includes a “Decommissioning Plan” for removing observatories and restoring the site.  To date, only one of the existing 13 observatories has started the process.  A UH environmental study concludes that astronomy activities have caused “substantial and adverse” impacts to the mauna’s natural and cultural resources.

2014 – Another follow-up audit finds UH failed to adopt a single rule to manage public activities on the mountain.

2015 – Governor David Ige temporarily stops construction on Mauna Kea after 300 mauna protectors peacefully block roads to the proposed TMT site and 31 are arrested.  A petition with 53,000 signatures calling for a halt to the TMT and the arrests of protectors is delivered to Ige.  UH’s President admits that “[UH] has not met all of [its] obligations to the mountain or the expectations of the community.”

2017 – Another audit finds that none of the 8 recommendations in the 2014 audit had been completely implemented.  UH and DLNR have also failed and to adequately implement 32 of 54 management actions that concern Native Hawaiians.

If you think Mauna Kea deserves better care, help spread the word by sharing this video.

To see how OHA is intrinsically related and how OHA has a fiduciary responsibility to steward Mauna Kea along with the State, BLNR and entities it leases lands to click here.

If you support Sacred Mauna Kea Hui’s blog, advocacy, litigations, and stand, click our logo or click here to find out how you can help keep our work going. We cannot win without you. And with true sustainability EVERYONE wins. Mahalo! A e ku mau me ka haʻaheo! 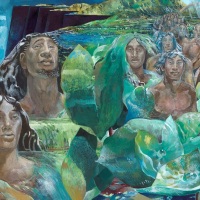